Choose the number of tickets you would like to purchase for this event and then click “Get Tickets”.

The program features Beethoven’s sublime 11 Bagatelles, Op. 119, followed by a unique set of 11 Bagatelles by a New-York based composer, Steve Lebetkin, and ends on a bright, cheerful tone with Beethoven’s late, programmatic Piano Sonata op. 81a, “Les Adieux”.

Engage directly with Daniel during the pre-concert talk, followed by an amazing, virtual performance on the Fazioli F308 concert grand – in the comfort of your own home.

A special note about this world-premiere performance from the composer, Steven Lebetkin:

I am honored today by the first public performance of my Eleven Bagatelles for Piano by Daniel Vnukowski.

These Bagatelles were both newly composed in 2017 and joined with other works composed during my early teenage years. The group came shortly after the successful premiere of my Violin Concerto at Carnegie Hall in New York City.

Beethoven and Mozart when young boys both studied composition with Joseph Haydn, the inventor of modern compositional technique as we know it today. Their early works are often indistinguishable from Haydn’s late works. Yet both grew to expand composition technique in quite different way. In the case of Beethoven, he explored the adoption of speech and emotive expression, similar in some ways to the manner that an actor would perform a monologue onstage. There are short ideas, fits and starts, pauses, silences, all weaved together in a cohesive experience that together, feel as if the music is speaking, and along an inevitable path from beginning to end.

Beethoven’s unique compositional technique expands upon the work of Haydn yet goes much further, later with Chopin in his short piano preludes, then Brahms, Stravinsky, Bartok and Britten.
These Bagatelles, like my other late works, also rely upon the compositional speech technique of Beethoven, and of course Chopin in his preludes, and later on Bartok. Each are short, intimate, speech-like, unfold in an inevitable path, and intended to touch the human soul in eleven different ways.

I hope they touch yours. 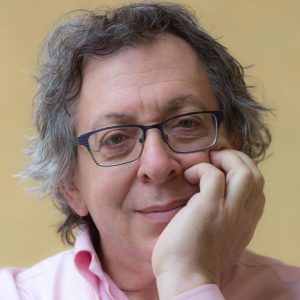 Steve Lebetkin is an American composer and musical descendant of the late Jewish composer Karol Rathaus, a leading early 20th century film and classical composer that emigrated to America during the Third Reich.

Rathaus, a student of Franz Schreker, was a major influence on the three major American composers with whom Lebetkin studied – Gabriel Fontrier, Sol Berkowitz, and Leo Kraft. He also studied composition with Hugo Weisgal.

Lebetkin carries the torch of a great European musical composition tradition whose roots go back to Haydn. He is a leading advocate in his works and public presentations to distinguish between harmonic languages and compositional technique, regardless of style, venue, or era. Lebetkin’s lecture series “What Makes Great Music Great” takes a fresh approach towards understanding musical composition for the general public, musicians, and media professionals. Lebetkin’s most recent works include the album “Perpetuum Immobile”, which stakes out new paths for the blending the best in class for New Age Chamber Music, classical, media and symphonic. Lebetkin’s symphonic, choral, and chamber music works are performed by orchestras and groups throughout the world.