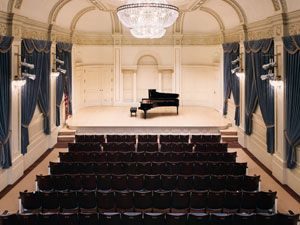 Tonight’s program presents three musical figures that span over 250 years of Western music history. Although one can immediately note considerable differences in each composer’s style or life story, there is one binding factor that brings all three of these composers together: Each composer had left his homeland and readily assimilated into a new culture – a new home where each conceived some of his greatest works.

Handel’s Keyboard Suites contrast sharply with the better-known suites of his contemporary J.S. Bach. Although both were born in 1685 (and killed by the same eye doctor!), Handel possessed a much different musical temperament. For the most part, these suites deviate from the structural rigidity of a traditional French belle danse suite, incorporating dotted fugues, variations and sonata-like movements. Keyboard Suite No. 7 also employs a passacaglia finale, resembling a chaconne with 30 variations.

The “Eight Great Suites” were published in 1720 and combine older material originating as early as his student days in Halle with newer material from his London years. In contrast to Bach’s polished suites, Handel’s are far more extemporaneous, combining the discipline of German contrapuntal art with Italianate lightness and lyricism.

The Third Piano Sonata was written at the height of Karol Rathaus’s career in 1927, just after the success of his groundbreaking opera The Last Pierrot that catapulted him to the very forefront of young Central European composers.

Once championed by such luminaries as Walter Gieseking and Eduard Steuermann, the Third Piano Sonata has remained largely neglected among modern-day pianists, yet remains a striking testament to the versatility of this composer, who was equally formidable in every style of composition. The work was premiered in Berlin by Bruno Eisner on 10th of November, 1927 and in the U.S. (Philadelphia) by Walter Gieseking in early March 1929, followed by a more important success in the Saminsky concert series (New York).

In this Sonata, Rathaus resorts to the use of traditional musical forms, with the first movement resembling a sonata-allegro form based on two contrasting themes. The overall mood is dark and unsettling with alternating use of tonal, polytonal and split-chord harmonies.

The second movement, marked “Scherzo,” is a dark comedy characteristic of the early expressionist films of Austrian-German film director Fritz Lang. For example, the contorted twists of melody and high levels of dissonance would make an excellent counterpart to Lang’s opening of his highly-regarded cinematic sci-fi epic, Metropolis, directed the same year (1927).

The third movement is a fugue based on an expressive subject that undergoes a wide range of variations throughout many registers of the keyboard, while the fourth movement is a brilliant, virtuosic showpiece with a heartfelt, contrasting middle section, devised of quartal harmonies.

Similar to Handel and Chopin, Rathaus was highly skilled in the art of improvisation. His compositions often appear as written-out improvisations with cadenza-like sections throughout the sonata and elements of jazz in the fourth movement.

Also in common with Handel and Rathaus, Chopin was a master virtuoso at the keyboard whose piano works transcended the limitations of the instrument in his era. Yet, he gave only about 30 public performances in his lifetime.

Chopin’s works combine the lyricism of an Italian bel canto aria, the charm and elegance of an aristocratic Parisian salon, and the pride of his Polish heritage. The 24 Preludes are an homage to the preludes of J.S. Bach’s Well-Tempered Clavier with each individual Prelude written in a different key and based upon a single musical idea or mood.

Although Chopin was disturbed by any programmatic connotations given to his music (consider his diatribe against Schumann’s analysis of the “Là ci darem la mano” Variations), according to the German conductor Hans von Bülow, certain preludes can evoke the grandeur of the Cathédrale Notre-Dame de Paris (No. 17), tolling bells (No. 6), stormy seas (No. 24) or a night moth (No. 10).
As a cycle, perhaps the one moment that captures the two extremes of Chopin’s musical expression is the transition from Prelude No. 15 to No. 16: The former is a cantilena that evokes the utter simplicity and tranquility of raindrops, while the latter begins with a strident, defiant declamation that draws upon the revolutionary fervour of Chopin’s Polish pride.